ONCE IS ENOUGH Trailer Unveiled 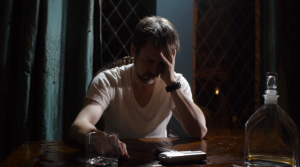 Over the past couple of months while I was sporting a beard as Baron Skanskorg in Undermain Theatre’s production of Strindberg’s The Ghost Sonata, I was privileged to work with independent filmmaker Paul Csige on his new film, Once is Enough, a comedy/fantasy about finding one’s way in modern America.  The production wrapped principle photography last week and Paul wasted no time in cutting together a trailer in time for the wrap party hosted yesterday.  Here is a peak at good things to come:

The film follows John Everman, recently divorced and reluctant to start over. On a beer run, John’s car suddenly breaks down in front of a warehouse run by Bob, an out-of-work Wizard.  John sees an opportunity to get his old life back by trying out new ones.  Bob gives John new lives and he’s swept away on adventures as other people but will they give him the life he truly wants?

In addition to the trailer, an extended clip featuring snippets of all the actors involved with the production was shown as well.  I was quite delighted to find so many actors I know and with whom I have worked involved in this film.

Once is Enough is scheduled to complete post by the end of summer 2013.

Ready Teddy will slice through Muskogee, Oklahoma later this month when it screens at the Bare Bones International Film Festival.  Writer/director Jerod Costa announced recently that his bloody opus has been nominated in the Best Horror/Sci-Fi Micro category at the festival which champions small-budget filmmakers.  Ready Teddy is scheduled to run Saturday, April 30th at 2 PM.

Elvis is kidnapped by four Liverpudlian lunatics seeking to extract the secret of That-Which-All-Men-Desire. Caught in a trap and can’t walk out, will our hero get all shook up? That’ll be the day! Not for the squeamish, Ready Teddy is a tale of blood, guts and peanut-butter-banana cuisine.

Brad Stephens stars as a sinister Paul McCartney in the film.  Shot in the Dallas area, Ready Teddy made its début last year at the Trail Dance Film Festival, winning two awards including Best Dark Comedy.  It then went on to claim the Best Short Film award at Blood Bath 2: The Film Festival in November.

The Bare Bones International Film Festival was created for filmmakers, screenwriters and actors involved in independent motion picture projects anywhere in the world.  Movie Maker Magazine named the festival one of their “25 Festivals Worth The Entry Fee” in 2010.  The festival run April 25–May 1, 2011 in Muskogee, Oklahoma.