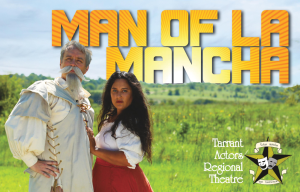 Jan Farrington of TheaterJones published her review today of Tarrant Actors Regional Theatre‘s current production of Man of La Mancha and it is quite favorable.  Congratulations to my wonderful cast and incredible crew for a most stellar show!  We reached for that star and it proved reachable after all.

Below are excerpts from the review:

Director [Allen] Walker has collected a strong cast, and music director Kristin Spires pulls fine singing from the mostly-male chorus and some great solo voices in the mix. These are singer/actors who can switch from a passionate song to a bit of goofy comedy in a flash, and dance well enough to Jenny Jermaine’s choreography. A few elements of the production need a kick in the pants (more on that later), but if you’re even half onboard with this musical’s message and charms you’ll end up with a tear in the eye …

When Man of La Mancha opened in Greenwich Village in 1965 (music by Mitch Leigh, lyrics by Joe Darion, and a script by Dale Wasserman, whose other ‘60s hit was his stage adaptation of One Flew Over the Cuckoo’s Nest), the show’s rag-tag appeal and eccentric hero set it apart—and audiences loved it, keeping the play going downtown and then on Broadway until well into 1968. It’s been revived endless times—sometimes buried in huge sets and special effects—but TART wisely sticks close to the show’s simple roots. Ellen Doyle Mizener’s weathered gray set design—wood railings and platforms hung with draped lengths of burlap—blends with costume designer Autumn Hyun’s rough, muted costumes. The overall effect is enhanced by Holli Price’s atmospheric lighting and Chase York’s projections.

If you don’t know La Mancha by heart, this is a play within a play, a storytelling tour de force tucked into a prison drama. Spanish writer/actor Miguel de Cervantes (1547-1616), caught up in the net of the Inquisition (Catholic Europe’s attempt to combat the new “Protest-ant” movement by destroying all opposition), is tossed in a crowded cell to await questioning. His life—and the unfinished text of Don Quixote—are in the hands of a scraggly, thuggish-looking band of fellow prisoners. Entertain us, they growl, and we might not tear you and your book to shreds.

Theater dude that he is, Cervantes (Brad Stephens) swings into action—diving into his trunk for fake swords and armor, searching the cell for “found objects” he’ll need (some clever prop choices by Don Gwynne), and giving the surprised prisoners parts to play in the story he’s improvising moment by moment.  And so begins his tale of the old country gentleman Alonso Quixana [sic], who reads novels of knights and ladies all day long—so many that his brains dry up and he imagines himself into the bent, twig-thin body of “Don Quixote de la Mancha,” a knight errant (that means he’s on the move) out to save the world, one damsel and one injustice at a time.

No matter that by Cervantes’ time, knights hadn’t been a thing for centuries: Quixote knows who he is.

Are we to admire his out-there idealism, or not? The world hasn’t always quite approved of the Don. The word “quixotic” means clinging stubbornly to unrealistic goals. “Tilting at windmills” (DQ thinks they’re evil giants) implies a disastrously inflated view of your own strength and abilities.

You don’t do La Mancha without A Voice, and Brad Stephens’ rich baritone and reach-for-the-rafters delivery scores high in the show’s blockbuster numbers, “Man of La Mancha” and “The Impossible Dream.” At the matinee show reviewed (the historically cursed second performance) Stephens struggled throughout with a sizeable moustache that simply refused to stick. Maddening and distracting, of course—and perhaps the reason his portrayal felt a bit flat at times. There’s plenty of urgency in Stephens’ great singing; no reason not to take that into a high-stakes performance as well.

Amanda Williams Ware makes a gutsy, tough-as-nails Aldonza, the kitchen maid (and “whore,” she adds defiantly) who’s re-imagined by the Don as high-born “Dulcinea”—the patron saint of his quests. Ware has a terrific voice and emotional range, whether quietly puzzled in “What Does He Want of Me?” or burning with anger in “It’s All the Same” and “Aldonza.” And she keeps an impressive side-eye trained on the gang of male prisoners who circle her like wolves.

Alex Krus (he directed TART’s 2017 Gutenberg! The Musical!) has a light, pleasantly piercing voice—and is sly and funny as the farmer Sancho Panza, roped in to be the Don’s faithful squire. A practical guy with his feet on the ground, Sancho admits he only stays in this loopy adventure because “I Really Like Him.” When he can, Sancho does his best to get between Quixote and the dangers he doesn’t see coming.

Jason Solis, seen as the Taxi Driver in Artes de la Rosa’s Women on the Verge of a Nervous Breakdown, is a standout among the smaller roles. He sings like an angel, and scores playing both the neighborhood “Padre” and an Alladin-esque gypsy carnival performer. Solis teams with Emma Bruce and Kristal Seid, both marvelous singers, as the niece and housekeeper who assure the priest they’re “only thinking of” the old man’s welfare as they try to stop his wanderings. Their trio has gorgeous harmonies—and at the end of the play Solis also leads a ringing chorus of the old Latin hymn “De Profundis” (“Out of the depths I cry to you, O Lord”).

Michelle Phillips, playing an innkeeper’s wife, literally jumps on a table to rouse us with “Knight of the Woeful Countenance,” and Kelley Garland is strong and sturdy as the Innkeeper. John Tillman comes on cool, brainy and sharp-edged as the niece’s fiancé Dr. Carrasco and the prison trial’s “prosecutor”—who dislikes Cervantes’ make-believe. Chase York is amusing as the cheerfully confused barber whose shaving basin becomes Quixote’s golden helmet.

The group of male prisoners (and the few women among them) make a good chorus—and what’s more, they’re “all in” for every moment onstage. As the audience for Cervantes’ story, they grin, applaud, lean in, wince in sympathy. And when called on to play a part, transformations are instant. Kirk Corley’s presence and Carlo Aceytuno’s fight moves are notable among the crowd, and Chris D’Auria’s expressive face keeps catching the eye.

At the performance reviewed, there were body-mike issues—most seriously for Amanda Ware as Aldonza/Dulcinea. Ware has a big voice and beautiful control over her singing—but her mike just wasn’t right. (The innkeeper’s wife, similarly equipped, nearly blasted us out of our seats.) The audience struggled to hear some of Ware’s softer, lower passages; that’s a shame, and needs a fix. Also, the prerecorded orchestral track needs to be dialed down at more than a few moments when it overwhelms the good singing onstage. Again, it’s TART’s first time at Scott—no surprise that things need adjusting.

Tilting at windmills? Time will tell. But they, and we, share a grand tradition of imagining a different, better world. And in Cervantes’ bony, brave old knight, we can choose to find a mirror reflecting our own faces—and a challenge to decide who we are, and what we hope for.

The full review can be read here.