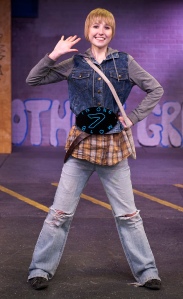 By Mark Lowry
Special to DFW.com

FORT WORTH — In the States, we like our holiday theater with a heavy dose of Dickens. But in his homeland, they prefer it with corny jokes and singalongs in a daffy fairy tale retelling, otherwise known as panto.

Fort Worth gets a taste of the form at Circle Theatre with Seven in One Blow or The Brave Little Kid by New Yorker Randy Sharp and Axis Company. Sharp and her colleagues were at Saturday night’s opening at Circle, and they have every reason to be pleased with the second professional production of their confection.

The anchor story is the Brothers Grimm tale of the Kid (a terrific Mikaela Krantz) who killed seven flies with one swat and then bragged about the feat without mentioning that the victims were insects.

That led others to think the kid had slain something much larger. Re-imagined as an urban tale, it’s narrated by homeless guys Mack (Shane Strawbridge as the most motivating emcee you’ll ever encounter) and Frankie (Eric Dobbins). The fly-slaying kid’s journey includes an Ogre (perfectly ogre-the-top Jim Johnson) and Scarlet Pimpernel (a hilariously stiff Brad Stephens).

Directed by North Texas’ maestro of farce, Robin Armstrong (who also handles costume design), Circle’s production takes some liberties with the British panto style and with Sharp’s original version. For instance, the role of the QK is meant as a “dame” role, or a man in outlandish drag. Here, Kevin Scott Keating is dressed as a foppish king, holding and voicing a sharp-tongued rod puppet for the Q part of that equation. The swap works.

Others in the cast having too much fun include Sherry Hopkins (as a formalwear Witch), Michael James (as December) and Amy Elizabeth Jones as a green vegetable kids normally don’t like.

For about the first half of Circle’s existence, it produced silly melodramas at Christmastime. It makes sense that, to close its 30th season, it would return to a delightfully bonkers way of making merry.