“One of Our Favorite Things” 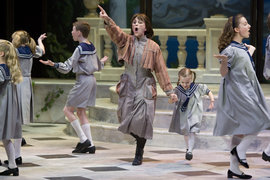 Sometimes it feels like any production of The Sound of Music could be performed by zombies. And still, the beloved songs about needles pulling thread and raindrops on roses would satisfy any audience. As long as a staging isn’t an all-out disaster, it’s typically a solid, entertaining show.

So what a relief that Casa Mañana’s revival, which opened Saturday and is directed and choreographed by Alan Coats, isn’t a walking-dead stroll. It’s thoughtfully performed, beautifully sung and occasionally insightful. Who knew that these characters could surprise?

On a stage of simple-but-luxurious-looking set pieces (by Mark Halpin), the Rodgers and Hammerstein musical rolls along at a swift but manageable pace.

As Liesl, the eldest of the Von Trapp children, Mary McElree gives a heartfelt turn. The others (Cooper Rodgers as Friedrich, Caitlin Hale Daniels as Louisa, Bobby Rochelle as Kurt, Brooke Verbois as Brigitta, Lauren MaGee as Marta and Cosette Cook as Gretl) are kitten-whisker cute, and they all manage laudable harmony. That’s important. These kiddoes were famous singers, after all.

Patty Goble, as the Mother Abbess, knocks it out the park on her big song, Climb Ev’ry Mountain; Tyce Green is a memorable Rolf; and Dennis Yslas gives Max some personality.

In one of the show’s most overlooked roles, Fraulein Schraeder, Diana Sheehan makes her less of an ice queen than what’s usually seen in that role.

When she quietly concedes that Maria has taken over her territory in Capt. Von Trapp’s life, it’s heartbreaking.

But the audience is over that quickly, because Jacquelyn Piro Donovan has already won us over with her quirky, stubborn and charismatic Maria. Her rich vocals give a slightly different sound to this music, but it’s striking.

As the captain, Steve Blanchard sings like a dream and charms, even through his character’s sergeantlike demeanor. Like Frau Schraeder, that’s a role too often played at a distance.

Perhaps it’s because it happens in a more intimate space (Casa Mañana Theatre, not Bass Hall), but under Coats’ direction, it’s as if the sun has melted all signs of ice on this oft-climbed mountain of a musical.