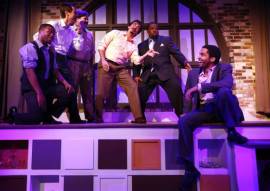 If you’re seeking relief/entertainment from the Texas 111- degree summer and you’ve exhausted the bats and spiders or require a more adult, sophisticated form of entertainment you couldn’t ask for better company than attending a shining, hot production of Fort Worth’s Jubilee Theatre’s final production of its 31st season: Stephen Sondheim’s “Company.”

Beyond the ubiquitous “Into The Woods” or the occasional “Sweeney Todd,” a DFW Sondheim production is rare. Nearly any Sondheim production demands singing and acting chops of the highest degree from every member of the company. This challenge makes it difficult for most companies to fill not only the lead roles, but also every role with top-tier talent. All of which makes Jubilee’s bold and ambitious “Company” all the more impressive; they make it look easy.

“Company” revolves around 35-year old bachelor Bobby (Robert, Bob, Bubby, etc.), his five married/coupled friends and three of his girlfriends. The action begins and ends at a wealthy, Upper-Manhattan apartment where the five couples have gathered for Bobby’s surprise birthday party.

The remainder of the show is presented in no particular chronological order as a series of vignettes each featuring Bobby and one of the couples or one of the girlfriends all of whom are worried/eager for Bobby to settle down and get married. While each vignette is played out, another character comments or sings in a Greek-chorus style, about the individual vignette on display.

Jubilee’s “Company” is brilliant, engaging, thought-provoking entertainment. Harry Parker directs fluidly and seamlessly and along with Artistic Director Tre Garrett, has assembled a marvelous cast. Set Designer Brian Clinnin keeps things simple yet elegant. Above the ground-level performing space, Clinnin has built a low-rising tri-tiered set glimmering with polished solid-wood floors set against a large, semi-circular window highlighting the skyline of Manhattan (and implying the wealth necessary to afford such a view). Musical Director Michael Plantz keeps the score minimal which seems appropriate for Jubilee’s small space. Although it makes you yearn to hear the score performed by a full orchestra in a larger venue.

Lloyd Harvey as Bobby is a delight. Harvey is handsome and charming with a strong stage presence (he’s in every scene) and voice. 2012 is becoming a breakout year for Harvey as Bobby is his second major lead role this year (the other being Uptown Player’s “Take Me Out.”)

As an ensemble, all 14 (!) principals are tight and sharp as shown in the second act opener “Side By Side/What Would We Do Without You.” Meg Shideler nearly stops the show as Amy, a lovable, neurotic mess who develops not merely cold, but frozen feet on her wedding day. Shideler’s “Getting Married Today” is terrific. Alison Hodgson is mesmerizing as April. April is one of Bobby’s three girlfriends, a self-described dumb flight attendant. Hodgson is anything but, displaying mature, comedic nuances and a voice that nearly surpasses her looks. Jubilee vet Marcus M. Mauldin (married Larry) is given few lines but inhabits his character like a fine-fitted Italian suit.

With few exceptions, the rest of the cast provides solid performances. Slightly disappointing were Ben Phillips and Tracy Nachalle Davis (as Harry and Sarah) who play an alcoholic/binge-eater couple who delight in pointing out each other’s faults. They are given clever, passive-aggressive lines that need to be attacked with more bite and venom. Michelle Rene (JoAnne) nails “The Little Things You Do Together” singing counterpoint to Harry and Sarah’s frolics.

JoAnne is one of “Company’s” more complex characters — oft-married, sassy and saucy — and she gets to sing arguably the best and well-known song in the show: “The Ladies Who Lunch.” In the song, JoAnne is mocking the purposeless, self-absorbed wealthy Manhattan wives she sees everyday. But during the song’s climactic finale, JoAnne realizes that she herself is one of those wives.

Rene’s “Ladies” lacks the passionate poignant pathos that the song demands. Instead, Rene powers and belts her way through the song. “Ladies” is a song that doesn’t require perfect pitch. However it does demand tension and emotion as the song slowly builds with multiple key changes, pauses and nuances up to the final bars of the repeating lyric “Rise” which if sung correctly can literally move an audience to their feet.

There are many reasons to celebrate Jubilee’s “Company.” First, it’s just damn great. Second, Jubilee Theatre is North Texas’ premiere African-American theatre, thriving for 31 years in less than tolerant Fort Worth, Texas (which has less than a 20 percent African-American population).

Staging a Sondheim show about wealthy, Upper Manhattan Caucasians is a ballsy move for Jubilee. It’s refreshing to see a show (anywhere in the DFW metroplex) so well produced that no one bats an eye that the lead character is African-American, that half the characters in this African-American theater are cast with Caucasians and that the show features an inter-racial couple.

All of this works because the theme of “Company” is color-blind and universal: marriage is hard work. Marriage is filled with love, companionship and bliss, but it also has its valleys where selfishness, pettiness, unhappiness and more reside. Well done, Jubilee.

“Company” was revolutionary in many ways when it debuted on Broadway in 1970. Sondheim (after writing the lyrics for such traditional shows as “West Side Story” and “Gypsy”), literally evolved the American musical by presenting a show with no linear plot, no chronological order and with an open-ended finale (what does happen to Bobby?).

“Company” was ahead of its time by featuring a 35-year-old unmarried man as a lead. While it is now more commonplace to wait until your 30s to get married, the opposite was true in 1970. Predating the Women’s Liberation Movement by a few years, it also featured three single, employed women in the Big Apple. One male character even asks Bobby if he has ever had a homosexual experience and both men admit that they had.

A documentary of the recording of the original cast recording of “Company” was made shortly after the show opened. It most notably features original JoAnne, Elaine Stritch, struggling to record the essential “Ladies Who Lunch.” There was a 1995 and a 2006 revival of “Company.” The 2006 revival won the Tony for Best Revival and was filmed live; the DVD and Blu-ray of the 2006 revival is widely available.

It was just announced this week that a 2011 New York Philharmonic concert staging of “Company” at Lincoln Center will be released on DVD and Blu-ray this fall. The staged concert version stars Neil Patrick Harris as Bobby and Patti LuPone as JoAnne.

Theatre is life. Cinema is art. Television is furniture. Get a life.