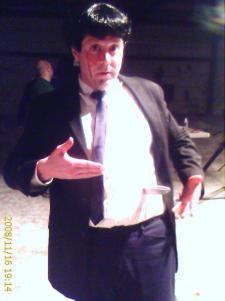 The bizarre and bloody short film in which I play a Goodfellas-esque Paul McCartney successfully completed principal photography over the weekend.  It took two 14-hour days to shoot the six page script but there were a lot of effects to cover in those six pages.  Without giving too much away, let’s just say there was more blood spilt in this flick than contained in all four Beatles combined — or perhaps almost as much as was in Elvis himself.

I just received an e-mail from the screenwriter and director, Jarod Costa:

It’s a great feeling to stop for a moment, look to the right and Elvis is on his cell phone wandering a graveled Mansfield parking lot…turn to my left and see George Harrison and John Lennon bloodied and sharing a cigarette and look straight ahead and see Troy shirtless and spitting blood. Every one of you gave a spectacular performance and deserves massive amounts of kudos. I now know what cast and crew I want on all of my projects.

It’s a great feeling for an actor when a director is this enthusiastic about a shoot.

I’ve been promised stills from the set and, of course, a copy of the completed project which should be done before the year is out.  In the meantime, above is a shot taken with my phone.  Enjoy!